I am back from speaking at CSSConf EU on the subject of "Where does CSS come from?" My slides are here, and I believe the video will be out soon. Next stop for me is An Event Apart in Boston. After that I'll be at Google I/O - not speaking, just hanging out and going to sessions.

Announced in the last few days, I'll also be speaking at NordicJS in Stockholm.

Our friends over at SitePoint have published Jump Start Responsive Web Design, 2nd Edition and have given me three copies to give away.

To get your name into the virtual hat, send me an email (replying to this will work) and tell me 2 things:

Send this before next Monday, 15th May and I'll draw 3 email addresses at random from the submissions and send them to SitePoint who will sort out sending the books.

Jen Simmons and I were invited onto the ShopTalk Show to talk about CSS Grid Layout. It was a fun conversation.

Can I use CSS Box Alignment?

A lengthy post from Javier Fernández explaining the state of Box Alignment in CSS, which also explains the complexity of partial implementations of specifications.

Do check out the table partway through the post detailing the analysis of support across browsers.

In NYC? If so then check out CSS Layout Club, organised by Jen Simmons. Upcoming dates are this Thursday, 11th of May and then the 20th June.

A handy new pseudo-class is focus-within which is active when an element or any of its descendants have focus. This article is a nice introduction. The pseudo-class has been implemented in various browsers. You can see a demo which works in Safari 10.1, Chrome 60 (Canary) and Firefox 55. Or look at the video in this tweet.

A post about the outline-offset property to offset an outline on a box.

From Stéphanie Walter, a list of fun places to learn Flexbox.

Refer to the spec: Introduction

I'm breaking down the Grid spec and trying to explain each part of it. This could take a while, but here is the Introduction.

A collection of design patterns for data tables. 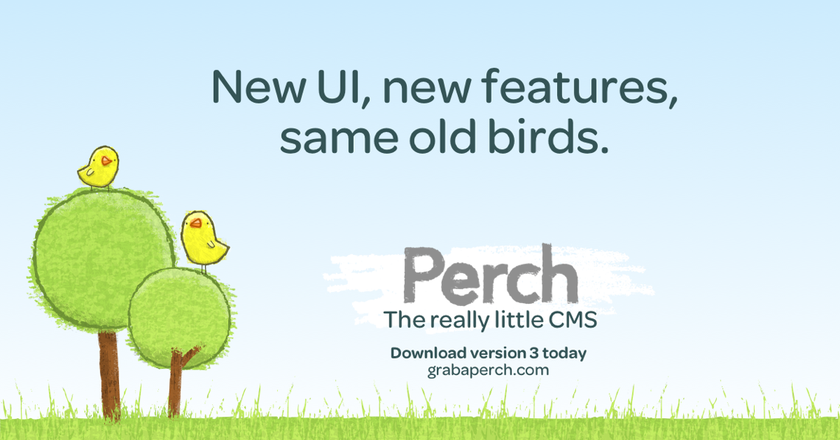 With a brand new, mobile friendly UI the really little CMS just got even better. We help you deliver fast-loading, beautiful and easy to edit websites to your clients - and keep right out of your markup!

Download a copy and see why so many people love Perch.